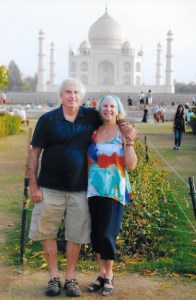 As we mentioned in our last newsletter, our recent trip to India brought us in contact with some amazing people, but there was one who we neglected to mention that we’d like to tell you about. His name is Jose, and if you think, “Jose? That doesn’t sound very Indian to me”, you’re right. Jose isn’t Indian and doesn’t live in India. He was born 79 years ago in Cuba, where he lived until 1963 when he emigrated to the USA. Jose was one of the 11 other travelers on our trip and the person to whom we both found ourselves most strongly attracted.

In retrospect, it was easy to understand why. Despite his age, Jose was possessed of the spirit, curiosity, sense of humor, and playfulness of a child. That would be enough to make anyone attractive. But there was something even more compelling about Jose that was less obvious until you got to know him a little better. Jose is a profoundly caring man. Although he has not had what most of us would consider to be an easy life, he has managed to live with an open heart and a profound commitment to giving to others.

Perhaps the greatest beneficiary of Jose’s generosity of spirit has been his wife Anna to whom he was married for 38 years. Anna passed away in 2009 after suffering for eleven years with Alzheimer’s disease. From the moment that her disease was diagnosed, Jose became her exclusive and then primary caregiver until her death.

“I knew even before the diagnosis was official that Anna had a physiological problem and I made a decision that I was going to dedicate my life to doing whatever I could to ease her physical and mental suffering. I first noticed that she was misplacing little things that she had been able to keep track of before. Anna was a schoolteacher for prekindergarten in a Catholic school in Florida. I wasn’t the only one who was noticing that Anna was becoming more forgetful, distracted, and absent-minded; the staff and administration noticed this too.”

“It got to the point where they couldn’t renew her contract because of what had become a serious disability that was preventing her from adequately fulfilling her responsibility to her students, whom she dearly loved. She was heart-broken to have to take early retirement.”

Left without an important source of family income, Jose and Anna were now also be left without the insurance that her job had provided for her, Jose, and their two daughters. Jose had been very active in supporting the church that he and his family attended. Their priest helped the family to secure health insurance. During this time Jose’s primary concern was in supporting Anna, who had still not been informed about her diagnosis and prognosis for the future.

“I knew”, Jose told us, “that Anna was not ready to accept the reality of her situation. Without actually saying so, she made that clear to me in no uncertain terms. I had to respect the limits of her capacity to face it, even though that meant having to ‘bend the truth’ to minimize her suffering”.

When it became apparent that Anna was not safe being left alone in the house or behind the wheel of their car, Jose told her that the car needed repairs but that it wasn’t worth fixing. Anna accepted Jose’s explanations when he was forced to remove other freedoms. “I think she might have had a greater awareness of her condition than she let on to me. I guess I’ll never know for sure.”

Shortly after turning 62, Jose took an early retirement from his business. After checking out the local memory care facilities for Alzheimer’s patients, he decided to keep Anna at home and be her primary caregiver on a daily basis. Over time, Jose’s energies were being severely depleted and he was in need of some support himself, so he checked out the local Alzheimer’s support group for caregivers. “It was very depressing”, he told us. “Everyone was so fearful and filled with sorrow that I knew that it wasn’t for me. My attitude towards the situation was very different from the people in that group.”

Jose stayed by Anna’s side practically non-stop for eleven years, providing increasingly higher levels of service as her dependency on him grew. “Anna seemed to feel much better when we had a predictable routine that she could rely upon. So there were regularly scheduled events and activities that we did on a regular basis. On Saturdays we went to the mall and afterwards went to the movies that she always enjoyed. She loved Parrot Jungle which we visited every Sunday afternoon.”

Because they both had always loved to travel, Jose had handicapped apparatus installed in his car and they traveled extensively throughout the state of Florida.

“In many ways”, Jose told us, “I was closer to Anna after Alzheimer’s than I had been prior to her illness. Her inability to communicate with me as easily as she used to challenged me to pay closer attention to her in order to understand what she was feeling and needing.

“For instance, I would see her holding her head and I knew she had a headache. She became like a little child who didn’t have sufficient language to express what was wrong. When she was constipated, to protect her health I always accompanied her to the bathroom. I watched to see if she was moving her bowels, since constipation can be a serious problem for people with Alzheimer’s. I would sometimes notice that she was limping and I would give her Tylenol. I stayed tuned into her just like I was nurturing a baby. I had been too preoccupied with my career to pay close attention to my daughters when I was younger. Because I was now retired, I could be fully available to my beloved Anna in her time of need. And for that I am deeply grateful.”

“Although Anna’s gone now, at least her body is, I still feel very connected to her. I visit her at the cemetery where she is buried every Sunday and speak with her like I did when she was alive. Of course I still miss her but I never feel lonely because of the depth of the connection that we have shared for so long.”

Jose’s story reminds us that love is timeless, and transcends even our physical presence. The love that Jose and Anna had was not fully developed at the beginning of their relationship. It grew and deepened through their shared contributions of care, attention, generosity, gratitude, forgiveness, compassion, and so much else that they gave to each other over the years. They co-created a partnership that exceeded their initial expectations and found that nothing, not Alzheimer’s, not even death, can diminish it. Anna and Jose are not exceptional people, but they created an exceptional marriage out of their willingness to risk living with the devotion that comes from a life of open-heartedness. Maybe the rest of us ordinary folks can do the same as well.